Toward Principles of Gene Regulation in Multicellular Systems

A team of quantitative biology researchers from Northwestern Engineering and the Weinberg College of Arts and Sciences has uncovered new insights into the impact of stochasticity in gene expression, offering new evolutionary clues into organismal design principles in the face of physical constraints.

In cells, genes are expressed through transcription, a process where genetic information encoded in DNA is copied into messenger RNA (mRNA). The mRNA is then translated to make protein molecules, the workhorses of cells. This entire process is subject to bursts of natural stochasticity — or randomness — which can impact the outcome of biological processes that proteins carry out.

The researchers’ new experimental and theoretical analyses studied a collection of genes in Drosophila, a family of fruit flies, and found that gene expression is regulated by the frequency of these transcriptional bursts. 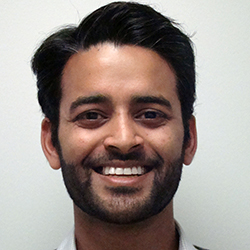 “It has been known for almost two decades that protein levels can demonstrate large levels of stochasticity owing to their small numbers, but this has never been empirically demonstrated in multicellular organisms during the course of their development,” said Madhav Mani, assistant professor of engineering sciences and applied mathematics at the McCormick School of Engineering. “This work for the first time identifies the role of randomness in altering the outcome of a developmental process.”

A paper outlining the work, titled “The Wg and Dpp Morphogens Regulate Gene Expression by Modulating the Frequency of Transcriptional Bursts,” was published June 22 in the journal eLife. Mani is a co-corresponding author on the study along with Richard Carthew, professor of molecular biosciences in the Weinberg College of Arts and Sciences. Both are members of Northwestern’s NSF-Simons Center for Quantitative Biology, which brings together mathematical scientists and developmental biologists to investigate the biology of animal development.

This study builds upon a recent paper in which the researchers studied the role of stochastic gene expression on sensory pattern formation in Drosophila. By analyzing experimental perturbations of Drosophila’s senseless gene against mathematical models, the team determined the sources of the gene’s stochasticity, and found that the randomness appears to be leveraged in order to accurately determine sensory neuron fates.

The researchers applied that understanding to this latest study using a technique called single molecule fluorescence in situ hybridization (smFISH) to measure nascent and mature mRNA in genes downstream of two key patterning factors, Wg and Dpp, responsible for the organ development of fruit fly wings. In comparing the measurements to their data models, the researchers found that, while each gene’s pattern of expression is unique, the mechanism by which expression is regulated — which the team named “burst frequency modulation” — is the same.

“Our results show that proteins’ levels of randomness are impacted by the physical structure of the genome surrounding the gene of interest by modulating the features of the ‘software’ that control the levels of gene expression,” Mani said. “We developed an experimental approach to study a large collection of genes in order to discern overall trends as to how the stochastic software of gene regulation is itself regulated.”

“Let’s say you are quickly flipping a light switch on and off, but you want more brightness out of your bulb. You could either get a brighter bulb that produced more photons per unit time, or you could leave the switch ‘on’ more than ‘off,’” Mani said. “What we found is that organisms control the amount of gene expression by regulating how often the gene is permitted to switch on, rather than making more mRNAs when it is on.”

Carthew, director of the Center for Quantitative Biology, added that this mode of gene expression regulation was observed for multiple genes, which hints at the possibility of a broader biological principle where quantitative control of gene expression leverages the random nature of the process.

“From these studies, we are learning rules for how genes can be made more or less noisy,” Carthew said. “Sometimes cells want to harness the genetic noise — the level of variation in gene expression — to make randomized decisions. Other times cells want to suppress the noise because it makes cells too variable for the good of the organism. Intrinsic features of a gene can imbue them with more or less noise.”

While engineers are excited by the ability to control and manipulate biological systems, Mani said, more fundamental knowledge needs to be discovered.

“We only know the tip of the iceberg,” Mani said. “We are far from a time when basic science is considered complete and all that is left is engineering and design. The natural world is still hiding its deepest mysteries.”